(Re)Birth of a Mural 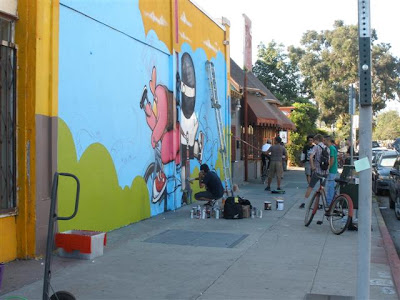 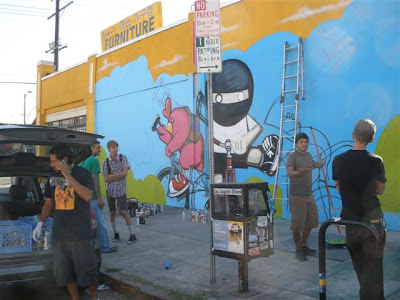 Artists Eye One (left) and Caché (2nd right)
hard at work on the new mural.

While going down my street on Sunday I discovered a rebirth of the recently-defaced Caché mural on Heliotrope and Melrose. The incident not only created a neighborhood crapstorm, but apparently caught the attention of Metblogs L.A. and the L.A. Weekly. Not long after, my friend Enci Box contacted her friend Caché, the mural's artist, on the deal. Apparently the artist is currently living with his girlfriend in Massachusetts, but expressed a willingness to return back home to fix what's been broken. Well, he went good on his word to head Back West and not only restored the old mural, but designed a new one.

I introduced myself to Caché and asked him a little about his process. He showed me his sketchbook which had the image of the familiar Zapatista and chicken characters (as seen on his Silver Lake/Echo Park murals along Sunset Blvd) riding bicycles and holding U-locks. I also asked him about his color schemes, by which he revealed to me he does have his own familiar set of bright background colors. Also, the wall is so coveted by local artists, that other muralists were ready to jump on putting their own pieces there. However, the staff at nearby Orange 20 Bikes took great pains to reserve the wall for a Caché mural redux. 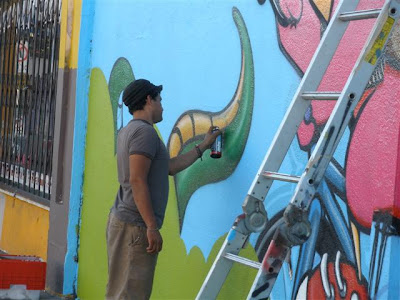 Artist Caché sprays on some familiar-looking tentacles.
Assisting him on his mural was artist Eye One, who actually devised the hooded Zapatista character and himself looked...rather familiar. I asked Caché what his real name was and it confirmed that my guess was correct - Eye One was an old classmate of mine from Marshall High! I hadn't seen him since graduating...uh...19 years ago! When I was the Editor-In-Chief of the school's Blue Tide campus newspaper in Spring of 1989, he was the Art Editor. Now, I'm a community leader in East Hollywood and he's one of the artists that designed one of its most popular murals. How things go full circle. After a long "catch up" conversation, he told me he's stayed local and has been active as a graphic artist for many years. We also have a few post-high school mutual friends, so it's a wonder why our paths hadn't (re-) crossed sooner. He also talked about his art, as well as the idiosyncrasies of his mural pieces - for instance, the arrow on the Zapatista's zapato usually points to the northeast when it's in murals (though the new Hel-Mel mural is an exception, as he discovered).

But hey, it's a small neighborhood, a small town and a small world.
Posted by Elsongs at 10:57 PM

Nice, so great to see his work back up there! Covering up the original was such a shame, what a champ he is to come back out and put up another. Now I can't wait to head out there to see it... a fine excuse to go eat at Pure Luck and Scoops if there ever was one!

Yeay! Awesome to see a beautiful mural and not a tagged ugly wall. Woohoo!

Elson! Thanks for posting about our new wall!

Thanks for sharing the story for this mural.